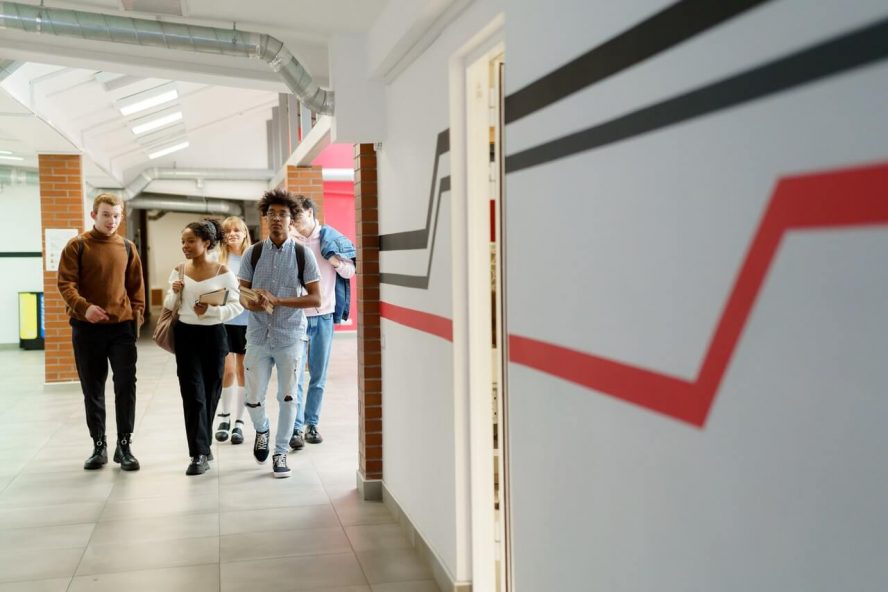 After finishing GCSEs, it can be hard for students to work out what they want to do. Some students choose to go on to Sixth Form. Others may feel they no longer want to go to school.

The laws around this can be confusing, as there are many types of education and training that can be undertaken post-16. These all have different rules around them. However, this article will help you to understand whether sixth form is compulsory for UK students. As well as what your other options for post-16 education are, with simple explanations for all the key parts of this question.

While this should have given you a basic answer to the question of whether sixth form is compulsory, this is a complex topic that involves the law, so please read on to find out the full details.

What is sixth form?

Sixth form is the name given to Years 12-13 (or 13-14 in Northern Ireland) at schools in the UK. It usually involves studying A-Levels or BTECs. Sixth form students start at age 16 and end at age 18, typically, although sixth form colleges may accept older students for the same courses.

Sixth form students also usually get free/study periods throughout the day. This is because they typically have a lot more work than other students and need time to complete coursework. They also take fewer subjects and generally have smaller classes, so may not need as much lesson time to complete all of the content than lower school years.

However, sixth form students still have to attend their lessons, and typically work in a way similar to how they were taught in lower school years. This usually means lessons guided by a teacher, with homework and coursework tasks leading up to exams at the end of a year.

Some students find the fact that sixth form is the same as when they were younger stifling and want to have more independence and work in a different way. Luckily, there are many other further education options, so you can choose which works best for you.

For more information on sixth form in the UK, please check out this helpful Think Student guide.

Are there different rules for sixth form colleges?

Sixth form colleges are the same in a general sense as sixth forms, except they are usually not attached to a high school. This means that the students often get more freedom in what they wear, and how they behave, as they do not need to be role models for younger students.

At sixth form college, students are unlikely to have to wear uniforms, although they usually have to follow a dress code. They also often are allowed to call their teachers by their first names and have more casual behaviour rules. They may be allowed to leave the college grounds during their free periods and at lunch, but only if they sign out.

College lessons also usually take a more university-style form. This means the teacher typically gives a lecture on the material to be learned, then the students undertake work outside classes as coursework or homework. This makes the experience very different to previous education, as the freedom and independence given to students is not something they have usually experienced before.

For more information about the differences between sixth form and sixth form colleges, look at this article by Newcastle University. Additionally check out this Think Student article.

What happens if you don’t go to sixth form?

If you don’t go to sixth form, there are 2 paths you could take.

Choosing to attend a different educational establishment or pathway is the most common choice for students post-16, especially if you are in England. Other options such as an apprenticeship, traineeship, or T-Level (all of which involve some study in a college, and some time in a workplace), or a college are all choices you can make if you do not want to attend sixth form.

In Scotland, Northern Ireland, and Wales, it is a matter of personal choice whether you want to continue with further education such as sixth form. Students in these countries can choose to go to another educational establishment, as mentioned above, or to leave education entirely.

At this point, many students choose to enter the workplace in a family business, or another job, as this is usually the only option open to them. If you are interested in this option, please ask your school for more details to see if it could be an option for you, and to help finalise your plans.

However, if you are in England and choose not to attend a further education establishment in any way, or to home school, you may be prosecuted. This is because it is compulsory to attend some type of further education, such as sixth form, until you finish school at 18. This may result in fines for your parents, and other legal consequences, so it is better to stay in a form of education that fits you rather than risk this happening.

For more information about what happens if you don’t stay in education, please see this helpful Think Student article.

What do you do if you don’t want to go to sixth form?

If you do not go to sixth form, as discussed above, you have many options. For example, you can go to college, an apprenticeship, or a traineeship instead, or even choose to home school using an online school to teach yourself a course.

If your issue with sixth form is that you do not like the course available to you, this list of courses available may help you decide what your next step can be (especially if you are in England, where it is compulsory to stay in further education):

For more information about what happens if you don’t want to go to sixth form in the UK, please see this Think Student article.

What is further education?

With all the talk about further education, you may be wondering what it is. Further education is the name given to any education or training completed after secondary school in the UK. It is usually started at age 16 after pupils finish their GCSE exams (or other equivalent qualifications). It is normally done before going to university or getting a job. However, level 3 courses can be taken at any age. It essentially covers all education below a degree level.

Further education is generally considered to be much more specialised than GCSEs and other similar qualifications, and more in-depth.

There are many forms of further education, with the most common including A-Levels and BTECs, which are level 3 courses. It also includes apprenticeships and traineeships. These are aimed at people who no longer want to attend school or want to enter the workforce.

For more information on what further education is, please see this helpful Think Student guide.

Different UK nations have different rules about further education. In England, further education is compulsory. This means that all students need to be in some sort of education or training until they are 18. This means they must be in either Sixth Form, college, or another form of education such as an apprenticeship. For more information about what happens if you don’t stay in education until you’re 18, check out this Think Student article.

The English government introduced this scheme to try and create a higher-skilled workforce, equipping young people with the training they need to succeed in the future. They are also trying to give more young people the chance to go to university. This system was introduced in 2014. For more information about this, please see this article by London Councils.

In Scotland, Northern Ireland, and Wales, compulsory school attendance ends after the school year students turn 16. This is usually called Year 11 (apart from in Northern Ireland, where it is referred to as Year 12). For more information about the school leaving age in the UK, look at this governmental guide.

These nations all have the opportunity for further education, and it is still free to attend. Most students choose to continue in education. However, some move into the workforce or other opportunities outside of school settings.

Yeah I think it is