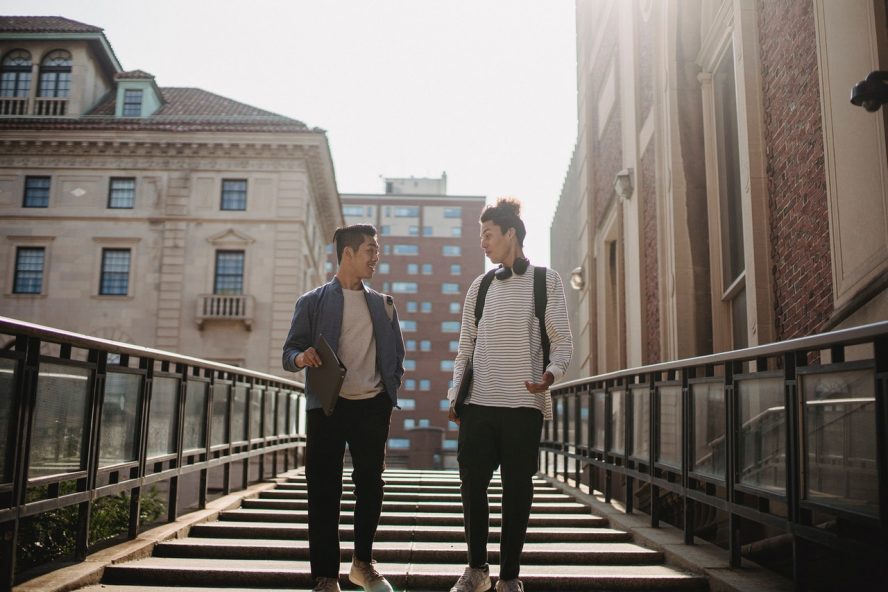 What is a Campus University?

In the UK, a campus university is a university which is completely situated in one area. Buildings such as university libraries, lecture halls, leisure centres/gyms and student halls of residence are all placed together in order to make it easier for students to travel to where they need to be.

A campus university is based in one, compact area, with plenty of facilities for students such as coffee shops and cafes. Campus universities were originally created to make university education more accessible to those without the means to be travelling long distances every day and they are now extremely common in the UK.

If you ask the majority of people, they will probably tell you that a campus university is better than a city university, but it really does depend on you as a person and the amount of money you have to spend on travel while you are studying.

Advantages of a Campus University

Advantages of campus universities include students having to pay less for travelling between their accommodation and lecture halls because of the convenience of how close together everything is.

As well as this, a campus university can provide a sense of community among students which makes making new friends easier and enhances the university experience. Campus events like parties and festivals are really fun to be a part of, and on-campus clubs and teams can be a great way to meet people with similar interests to you.

Campus universities are also statistically safer than city universities due to most campuses having their own security.

Finally, another advantage of going to a campus university is the fact that facilities such as gyms are close by, and shops and cafes are also very nearby to where your accommodation is, again making the whole experience very convenient for you while you are studying.

Disadvantages of a Campus University

A city university will also give you easy access to bus and train stations for you to visit home on your breaks.

Finally, a city university gives you the opportunity to gain the independence which many young people crave when they go to university – you can explore the city on your own terms and have the responsibility of punctuality and finding your way which gives you the experiences you will need to help you later on in life.

The University of Leeds is a campus university in the North of England. The campus is run by the Leeds University Union, and it is a smoke-free campus which has a diverse range of public art pieces, study areas and green spaces if you need some fresh air.

The campus itself is around 100 acres in size, which makes it the perfect size for a quick adventure! Despite the facilities for the university being situated together on the campus, it is only a short walk from Leeds City Centre, home to more cafes, shops and libraries, which means that if you find that you are not a fan of staying on campus all of the time, you can go exploring in the city easily!

For more information about the University of Leeds’s campus, check out their website!

Is the University of Bristol a Campus University?

The University of Bristol is considered to be a campus university as, although there are a few student facilities spread throughout the city, the majority of learning at the university happens on their very own campus at Clifton.

Bristol University’s campus does not have as much variety as that of Leeds, but it does have 8 student libraries on campus and 3000 study spaces! A benefit of this campus is that it has free Wi-Fi all through the campus, including inside the many cafes and sporting facilities which are also available.

If you want a bit of a change from the campus, the university is perfectly located nearby to Bristol’s many cultural attractions, along with green spaces which are perfect for bike rides and walks. Not to mention, the campus also has many accessible transport links including main motor ways, train stations, bus stations and even Bristol Airport.

For more information about Clifton campus at Bristol University in general, have a look at their website.

Is the University of Manchester a Campus University?

All of the facilities which belong to the University of Manchester are located in the city and are placed within walking distance for extra convenience for the university’s students. Despite this, there may be certain places for students that require different forms of transport, and the university encourages its students to travel sustainably, either by bicycle, train, tram, coach or bus.

For more information about the student areas at the University of Manchester, check out their website.

Is the University of Birmingham a Campus University?

The University of Birmingham is a campus university, with a variety of restaurants and bars on campus and plenty of opportunities for great nights out! The campus also contains many large green spaces which are great places to simply get some fresh air and study.

The campus also contains many facilities such as a state-of-the-art library and a world-class Sports Club. This club contains many sports facilities such as a 50m pool, climbing wall and a gym with 250 stations! In addition to this, like the majority of universities, the University of Birmingham has a huge variety of clubs and societies – there are over 500 of them to choose from! There is even a Harry Potter club for avid fans! For more information about the many clubs and societies at Birmingham, check out their full list.

Along with the many clubs and societies at the universities, there are many cultural learning experiences on campus such as the Lapworth Museum of Geology (which showcases a real, full-size T-Rex skeleton) and the Bramall Music Building, which features a 450-seat auditorium!

For more information about the campus at the University of Birmingham, check out their website.

Is the University of Cardiff a Campus University?

The University of Cardiff is a campus university, but it is different to the others. The university is comprised of two main campuses – Cathays Park and Heath Park. The Cathays Park campus is where the majority of the academic schools at the university are based and has a Large Student’s Union, several libraries on site and 24/7 security on campus!

The facilities on site at Cathays Park include a bookshop, general shop, nightclub and pub – Cathays Park is also less than half a mile from Cardiff city centre where even more cafes, restaurants and clubs can be found! Click here for more information about Cathays Park campus at Cardiff University.

Is the University of Newcastle a Campus University?

The University of Newcastle is a campus university with a 50-acre campus in the city and overseas campuses in London, Malaysia and Singapore. The campus in Newcastle has many beautiful green spaces and a perfect blend of both old and modern architecture.

A good thing about this campus is that the majority of student accommodation is within a 10-minute walk of the campus which means that students do not have to unnecessarily waste money on travel to and from their lectures, libraries, restaurants and cafes. The campus is also within only a 2-minute walk of the city centre which has a huge shopping area.

They encourage their students to travel sustainably – either on foot or by bike – and this is easy to do due to how close together everything is on campus. For more information about the University of Newcastle’s campus, check out their website.

Queen’s Campus at Durham University is aimed at international students who need to complete their pathway programme at the International Study Centre – after this, they move to the Durham City campus.

Stockton city is only a short walk from Queen’s Campus, and it is a fantastic place for shops, shopping centres, bars and restaurants. The campus itself is located beside the River Tees and is small enough to feel welcoming and secure. Queen’s Campus has a friendly, community-based spirit because of its small size.

Once international students have completed their pathway programme with the International Study Centre on Queen’s Campus, they can move (if they want) to the Durham City campus, which is closer to the centre of the city.

Durham City campus may not be considered as a campus by some, as the majority of the facilities are spread throughout the city of Durham, but the city is extremely compact, so the university facilities are in very close proximity to each other. In Durham City, you can admire the famous historic architecture while also enjoying the state-of-the-art modern facilities and the wide variety of shops, restaurants and entertainment venues.

Durham City is also very easy to travel to and from due to the regular train services which travel to Manchester, Newcastle and Edinburgh, and these can be appreciated for their own shopping districts and cultural features.

For more information about the two campuses at the University of Durham, check out their website.

Is the University of Nottingham a Campus University?

The University of Nottingham has a total of four campuses in England and two more located in China and Malaysia. The Sutton Bonington campus is designed for students studying at the Vet School and School of Biosciences. The King’s Meadow Campus is designated for the university’s professional services and business support departments. The other two campuses in England are open to all students, no matter what they are studying.

The University Park Campus and Jubilee Campus are home to loads of halls of residence which house over 7000 students, great sports facilities and modern state-of-the-art teaching and research facilities which ensure an excellent learning experience for those on campus. As well as this, the campuses also have plenty of shops, bars, restaurants and banks, convenient for everyone!

Like many universities on this list, the University of Nottingham’s campuses are dedicated to being friendly to the environment.

The Jubilee Campus itself is built upon a site that was previously used for industry and has a number of large lakes which provide habitats to a plethora of wildlife, increasing the biodiversity of the area.

For more information about the six campuses at the University of Nottingham, check out their website.

The University of Bath is a campus university which was established in 1966 which has many facilities, all in close proximity to each other. On campus, you can find coffee shops, cafes and university libraries complete with peaceful study areas for those looking to revise in peace and quiet. As well as this, the city of Bath is only one hour and twenty-five minutes away from London on the train, which opens up a range of activities to be a part of in your free time at the university.

The Students’ Union at the University of Bath has over 160 clubs and societies for students at Bath to join, which gives you an excellent way of socialising and making new friends with the same interests as you. Perhaps you could even take up something new which you have never done before.

Discovering a new interest, talent or hobby is all a part of the university experience! Some of the clubs and societies at the University of Bath include the Campus Radio, Musical Theatre and Biking.

For more information about the University of Bath’s campus, check out their website.