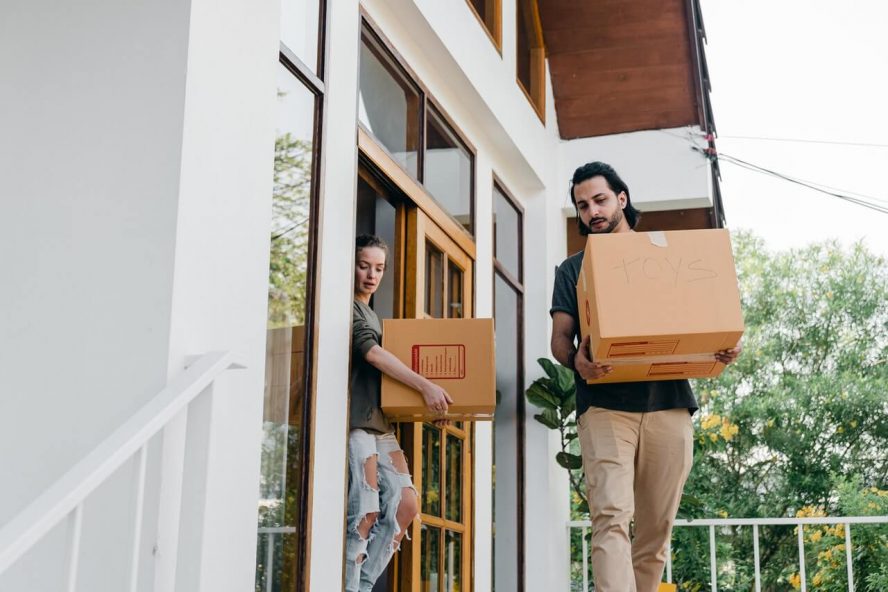 No matter your age, moving out is always a huge step and a significant milestone in your life. As you begin to grow older, you may start to see the people you grew up with start to pack their things and take flight to the next stage of their life. This may leave you wondering whether it is the right time for you to leave home- when is too early, or too late? What is the average age to move out in the UK?

Moving out of your childhood home is a step the vast majority of people have to take sooner or later. The question is, though, at what time do they take this step? In the UK in 2019, the average age to move out was 24.6 years old. This value changed from male to female, however; males left home at an average age of 25.4, whereas women left at an average age of 23.8 years old. These statistics change and vary dramatically over Europe- Montenegrin young adults left home at the oldest age- 33.1- whereas Sweden young adults left home at the young age of 17.8! This article will also go over the statistics in regard to moving out to go to university, drop–out rates and how many of those return home, and the laws in regard to when you can and can’t move out.

Focusing heavily on key data and statistics, this article will go over some key questions that may be raised about this articles topic- moving out- and provide direct answers to each. Enjoy!

What is The Average Age to Go to University?

Going to university is a major event in the majority of UK students’ lives, and it is likely the most common point for young adults to move out of their childhood homes and begin fending for themselves.

In 2018-19, there were 2.38 million students attending higher education; 1.9 million of those were from the UK, and 1.8 million of those were undergraduate. Undergraduates are those who have not yet obtained their degree, and there is a strong likelihood that a large bulk of those undergraduates are within the age range of 18-21. Why? Generally, you have to be 18 to attend university, and since UK university courses tend to be 3 years long, we can assume most of the undergraduates are within the ages of 18-21. Some students may be older, as there is no age limit as to when you can and cannot attend university. Some may join a year late, whether that be for personal reasons, they took a gap year, etc.– but as stated previously, it is most likely they began their higher education at the age of 18.

However, for some going to university may not be the point of no return- it is not uncommon for young adults to return home after university. In fact, this number seems to be on the rise, as in 1996 the number of students who returned home after university was 21%- in 2017 it had risen to 26%. This means that just over a quarter of young adults in the UK return home– so you’re not alone if you are not ready to leave in the uncertain times of being a new adult.

Not all students fulfil their time at university. Students are known to drop out, but just how common is this? On average, 6 in every 100 students drop out of university– that’s a 6.3% rate. These students may return home, further adding to the number of young adults across the country returning home, although it is not a guarantee that they will.

What is the Average Age to Move out?

For young adults across the globe, moving out is an immense milestone in their life, a time for new beginnings and new experiences. For many it is the start of their adult life. Almost everyone experiences moving out from their childhood home at some point in their life, but the question lies in what age the average person is when this occurs.

So, to cut to the chase, what is the average age to move out? The average age for a young adult to leave the nest in the UK is 24.6 years old. This is around the time when many have finished their higher education, have pursued a full-time job and have now saved up enough to start up a life on their own. The statistics change for different genders, however. Males tend to leave home later than women, at the age of 25.4 years old, compared to women leaving at 23.8 years old, almost two years earlier.

At the age of 18, approximately 90% of young adults are still living at home. By 19 years of age, this number has dropped to around 70%. The number reaches the half-way marker at around 21, and at the age of 23 less than half are still living with their parents. These numbers continue to fall as you get further on through the years.

Over time, the time young adults spend living with their parents has increased considerably. As mentioned previously the number of 18 year olds living with their parents is 90%- in 1997 it was  around 85%. The gap begins to largen dramatically as you make your way through the years; however, at the age of 25 the gap begins to close again, and the numbers start to level out.

All data mentioned above can be found at this source.

A study has shown that people expect to be 28 years old by the time they move out, however 1 in 8 said they expect to still be living at home by this time. These expectations, however, might not be met, as the graph from the data mentioned above- can be found here– showed that less than 5% of the population were still living with their parents over the age of 28. Young adults often go through uncertain times, with finances and all the other factors that come in the package of being an adult completely new to them it is to be expected that life for them may take unexpected turns. All data mentioned in this paragraph can be found here.

What Does the Law State About Moving Out?

Laws play an important role in whether you can leave home or not; this section will give you the run-down on which laws are in place that could restrict you moving out.

Legally, if you are under 16 you cannot leave home, as you are still classed as the responsibility of a minor. After this age you have the freedom to leave without consent to do so. Parents can petition for you to be brought back home, but if there is no severe underlying reason it is unlikely this petition will be successful. However, if you are under 16 but have strong reasoning for wanting to leave home, you are not tied down to your home. If this is the case, talk to a trusted adult or contact a service such as Childline to find out what your options are.

There is no law that states that by a certain age you must leave home. It is not against the law to live at home all of your life, although this is a notion that not many people would like to follow through with. By the age of 18, your parents obligation to financially support you ends, and they do have the legal right to evict you.

What Is the Average Age to Move Out in Europe?

Let’s look at things on a wider scale. Europe contains a multitude of diverse countries, and the statistics in regard to when their young adults move away from their parents some of these countries show vary hugely from the UK.

Young adults are shown to move out earlier in the more northern European countries– Sweden takes first place for their children to move out the earliest, as the average move out age for them is 17.8 years old! They are followed by Luxembourg at 20.1 years old, and then Denmark at 21.1 years old. Taking the final two remaining spots in the top five are Finland (21.8 years old) and Estonia (22.2 years old).

However, not everyone is moving out as early as this. Edging over towards more southern European countries, young adults here did not move out until much later. Montenegro takes the top spot for the oldest to move out in Europe- they left home at an average age of 33.1 years old! Second is Croatia, at 31.8, third is North Macedonia at 31.8 years old, fourth is Slovakia at 30.9 years old and finally Italy at 30.1 years old.

All data mentioned above can be found here.