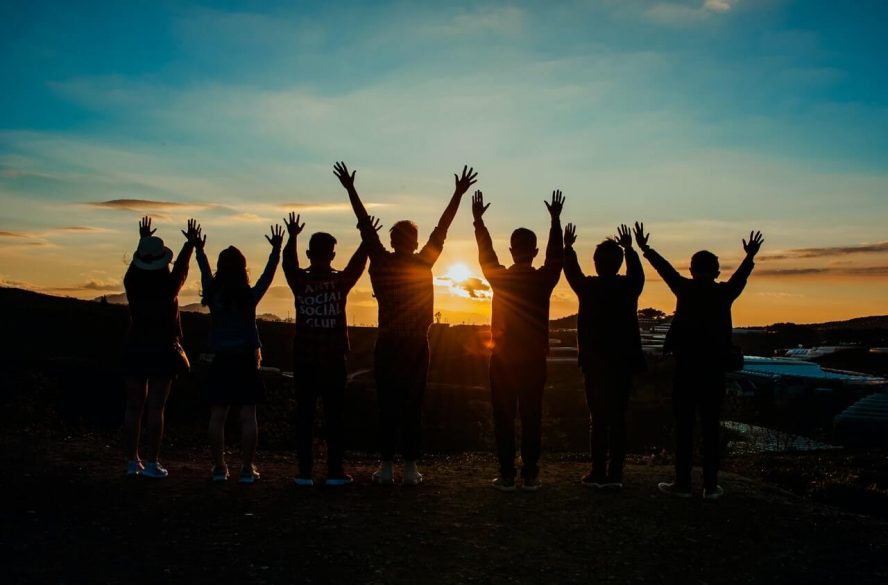 Some of you may be leaving behind five year long friendships to go to sixth form college and that can be scary. However, there is no need to panic as you are not alone. Everyone is going through the same thing. What matters is how you handle the change and adapt to your new surroundings.

Making friends is harder for some than for others, but there are a few tips that can be applied to make the whole process easier. The classic suggestion is to just be yourself, cliché I know. You should be able to feel comfortable in front of your friends and feel accepted as a person. The nature of sixth form college and many other forms of education calls for communication.  As a consequence, you will get to know people without even trying which will help you make friends, or at least acquaintances.

So, without further ado lets jump into a few practical tips you can use to meet new people and make friends at sixth form college.

Sixth form classes are typically smaller in size compared to secondary school. Going from a class of 30 to a class of 15 means you are likely to make closer friendships with them and are going to become more familiar with them individually.

The smaller class size also means it may be easier for you to ask about any group chats you can join. If you find it hard to ask people face to face, you can send around a piece of paper for people to write down their Snapchat or other social media handles.

Some of you might find it much easier to speak to people from behind a screen. This tip is good for people like that, as it provides a virtual space for you to foster new friendships without the stress of a social interaction.

A group chat is a good starting point for gauging who you would like to be friends with. As people start using the chat more, you can begin to tell what people’s sense of humour is like and possibly their interests might be revealed too. This way, you can interact with people when and how you want with less pressure than you would in real life.

From class group chats, you can branch out and create other group chats which contain you and the people you have gotten closer with over time.

Branch Outside Just Your Regular Classes

It does not have to be limited to your classes either. You can create group chats for your tutor or clubs you have joined. Your sixth form might facilitate communication between people who are planning to go to a certain university, or maybe doing an apprenticeship. You can form a group chat with these people and establish a longer lasting friendship that carries on past A-Levels.

You might want to consider applying this with students outside of your sixth form too. There are other forum-oriented sites which are designed for students to talk and support each other by offering advice such as The Student Room, or certain subs on Reddit.

Of course, take proper precautions when conducting yourself online with strangers, but there can be some nice people out there who like the same things as you.

4. Talk to and Hang Out With Friends of Friends

This step only works once you have at least one friend of some sort, but it can help you expand your social circle. When you have established one friendship, the best way to make more is to ask them to introduce you to their friends.

This may seem a bit awkward or desperate, but in the first few weeks of sixth form, everyone is just trying to find their place and fit in so that should alleviate some of the uneasiness. If you like your friend, then there is a high chance you might like your friend’s friends.

Depending on the size of your sixth form, you may have many, or just a few choices of friend groups to be a part of. Obviously larger sixth forms have the perk of having many options when it comes to friend groups, but that may be off-putting or intimidating to some of you.

A smaller sixth form with less students may be more approachable and easier to manage, but the chance of being an outcast is also higher due to the smaller cohort. However, smaller sixth forms tend to have a more tight-knit group of students so being a part of that will definitely benefit you in the friend department.

Overall, it is always worth familiarising yourself at least a little with friends of friends as you never know who you might meet. You may end up pleasantly surprised and gain a new best friend in the process.

This tip allows you to meet people with similar extra or super curricular interests which can set the stage for a great friendship. Your sixth form will likely be offering some form of club similar to the societies you would find at university. These may or may not be teacher-led, but regardless, it will expose you to a section of your sixth form consisting of people with the same interests as you.

If you go to a rather big sixth-form, or perhaps one that just has many students, you may find it challenging to connect with people on your hobbies. You can feel like a fish out of water and that your hobby is niche or that nobody shares it. However, by joining clubs based around your interests, you get to meet likeminded people and enjoy the company of students who are as invested as you in a hobby.

Team sports are probably your best bet here. Being part of a team can be a really positive environment to make friends, as everyone benefits from one person doing well. Everyone is rooting for each other so there is bound to be a relationship formed under those circumstances. It is a great way to expose yourself to many people at once as well if that is what you are best suited to.

Don’t Be Limited to Just the Sixth Form

You shouldn’t limit yourself to clubs only offered by your sixth form. There may be clubs nearby that your sixth form doesn’t offer, if this is the case you should join them regardless. Someone else from your sixth form might choose to do the same and you can form a link there.

Continuing with this point, joining a gym nearby might also be a good way of connecting with people from sixth form. You may want to consider joining if your budget permits it. Some people don’t like being talked to at the gym, but if you need to learn, or need some help most people you come across are willing to spare some time.

If you join a club that is super-curricular in nature, you have a chance of meeting people who have the same goals as you in terms of career or university. For example, joining a debate club is likely to have you brushing shoulders with future lawyers aiming for high level universities.

2. Speak to People in Your Classes

This is probably the most obvious tip, but it is the easiest and often most effective. At A-Level, more often than not, everyone has chosen to be there and enjoys what they are studying. This gives you the perfect opportunity to strike up a conversation about the classwork. It may seem boring at first, but it can open you up to get to know your classmates better.

Take advantage of those times the teacher tells you to get into groups or pairs and ask about how people’s weekends went. Group activities can allow you to familiarise yourself with your classmates and talk in a less awkward way as there is work to be done.  Even just asking to borrow a pen or asking for help on a particular exercise can lead to conversation and potentially a friendship.

In most cases, you will be spending upwards of 15 hours a week with the same group of people. There is bound to be some form of camaraderie formed just based on the circumstances. All being taught by the same teacher, and all being given the same work, you know to an extent what each other are going through.

Of course, you might not get along with absolutely everyone in your class but that is not necessary to find a good group of friends. If you find even just one person to talk to over the course of your lessons, it will make the sixth form experience that much more enjoyable.

Many great friendships have been started from just complaining about homework or talking about how hard a test was. You are all going through the same experience so use that to your advantage and voice your thoughts as chances are, someone else is thinking them too.

This tip might seem like a hassle, but it can be worth it if done correctly. Getting a job is a great way to meet new people and depending on where you go, it can foster some long-lasting friendships with people your age.

Chances are at your sixth-form, people are going to be looking a job whether it is over summer or during term time. Depending on the location of your sixth form, your classmates are likely going to be working in shops or restaurants nearby. This is a great opportunity for you to not only earn a wage, but form bonds with co-workers who could potentially be in your classes.

Any job requires some form of communication between employees, and this is especially true in the retail and catering industries. Even if you are not able to have in-depth discussions with your fellow employees while working, the small but frequent interactions will create a sense of familiarity between you.

Sharing a job with someone gives you a common ground if you are having trouble finding things to have conversations about. With a job, so many things are going to happen which you can joke or complain about to the person you are working with and form a friendship from that.

Benefits of Branching Out Away from Your Sixth Form

A job also allows you to branch out to meet other people your age who might not even attend your sixth form. You might meet some apprentices, or people from a sixth form nearby. This might not seem like an advantage at first but branching out from your sixth form bubble is a good way to establish relationships that may last through to post-18 education.

So many friendships end after sixth form due to people making different career choices and gradually drifting apart. Whether it is going to a different university than all your friends or may be not going to university at all, people can naturally lose contact with each other. Getting a job could combat this as you are increasing your outreach to more people, meaning the chances of you meeting someone with the same future plans as you are higher.

You can of course put the work experience on your CV or personal statement so you can still reap the benefits on the off chance you do not make friends from it.